Footings and Stanchions Pads are in. 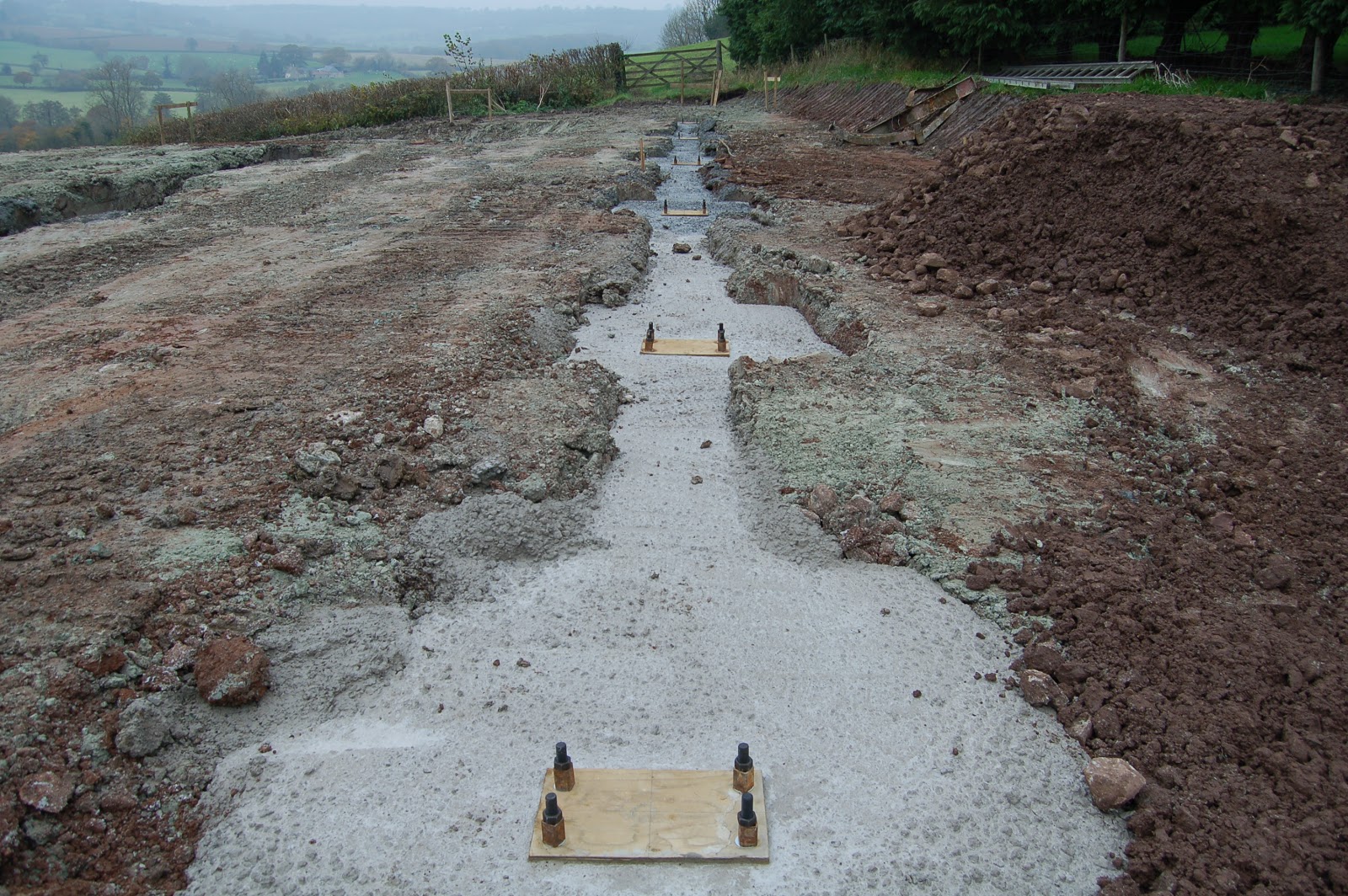 This is a photo showing the footings and stanchion pads which will take the steel I beam stanchions, the superstructure of the building. This photograph shows the run for the north side of the lean to building. A total of 7 cement lorries delivered cement from 1.30 pm until 6.30 pm, the last 2 hours we had to make do with the headlights of the swing shovel digger to help with the positioning of the pads which were positioned with plumb lines. Its all in now , we have been lucky with the weather during this part of the operation. 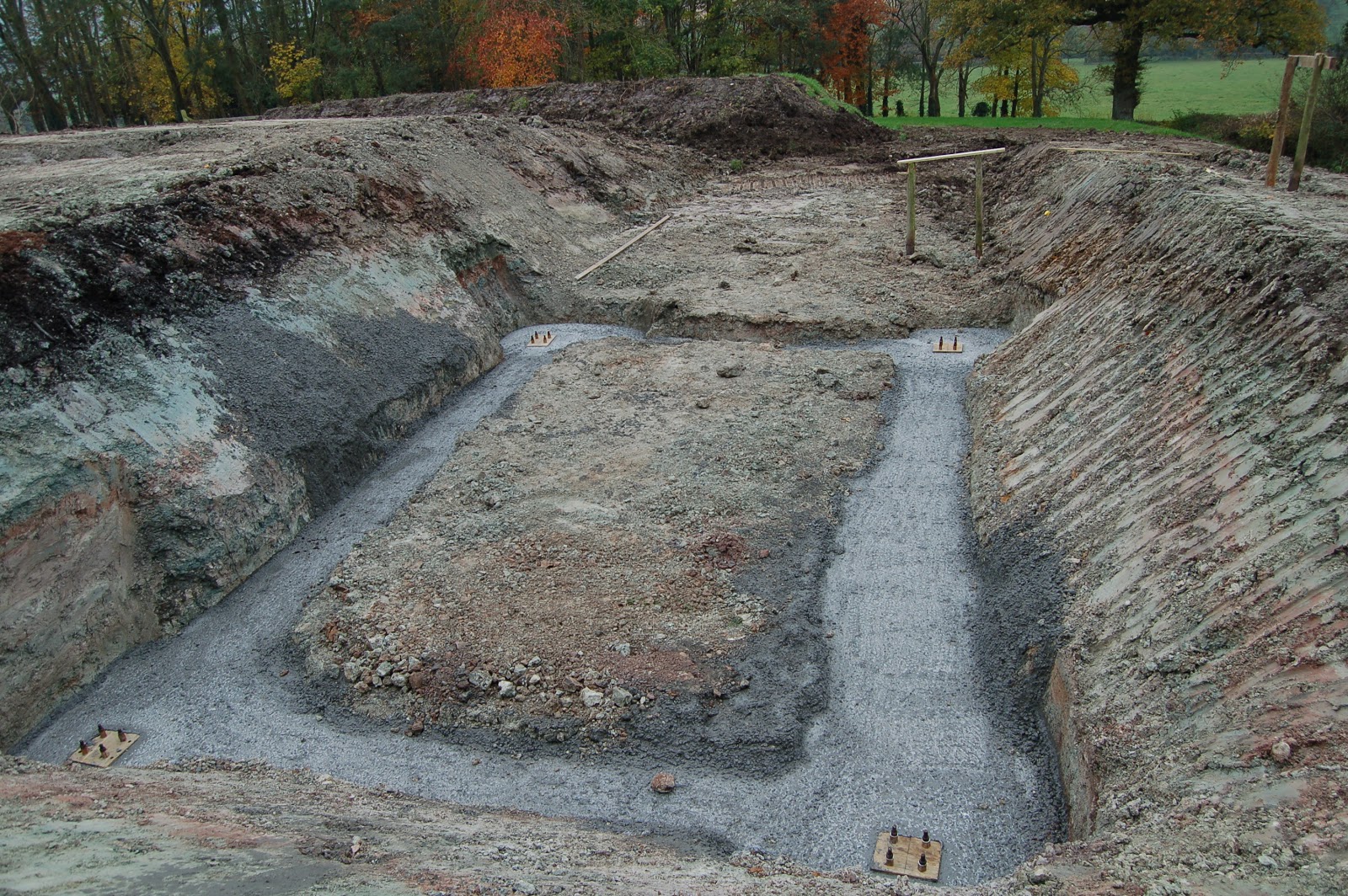 A View showing the pads and footings for the underground basement for the art gallery, note the 45% grading back of the sides, this will mean there is no need for tanking as water will drain away using the natural gradient of the plot.

Posted by Greg at Woodhayes at 03:36 No comments: 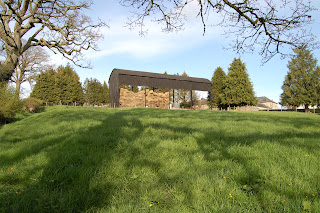 This is a shot of the Dutch Barn which has been at Woodhayes since the late 1930's. The barn has 4 bays, 2 of which contained hay harvested more than 20 years ago.We decided to salvage the bales of hay with string and use them for bedding for livestock overwinter. many of the hay bales had broken string gnawed through by rats. 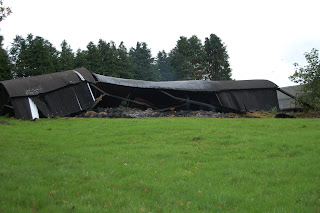 This photo shows the collapsed Dutch barn, David and his team used angle grinders to cut through the I beam supports and then it was a case of using the digger and back bucket to pull the Dutch barn down, the leg cutting and pulling down took 3 hours.  We managed to sell all the iron and corrugated iron for scrap, there was approximately 5 tons, proceeds from the scrap metal merchant paid for the dismantling and cutting up of the barn. 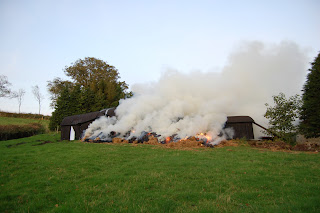 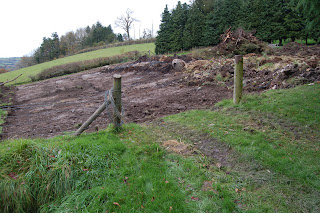 Once the steel and corrugated iron was cut up and cleared the site top soil was removed and banked up, to be used for landscaping at the end of the project. 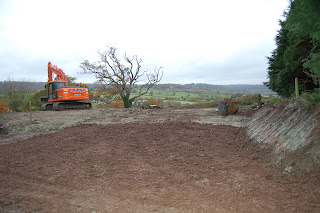 The site was leveled, we came across a lot of green sand and were pleased to see hard clay where the pads and footings will be going, in the foreground we have dumped hardcore for building materials to be unloaded onto a firm and stable surface.  Part of this area will become the entrance and 2 car parking spaces for the building. 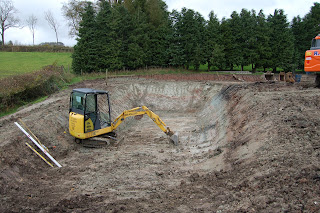 We have excavated down just under 3 meters which will become a basement storage area that will be located at the far westerly gable end of the new building. 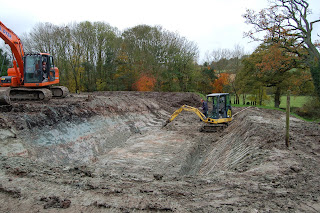 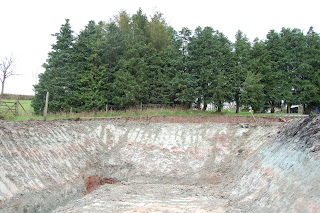 This shot shows you the height in relation to the trees beyond. 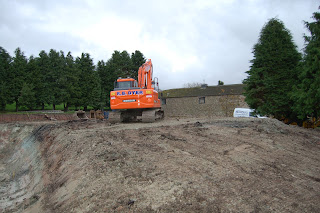 This shot shows the 15 ton swing shovel digger creating a platform for the building to stand on. We were originally looking at a small Ford digger and a dump truck to do the earth moving, however it seemed to make sense to have a beast of a digger in to do 2 jobs in one and saving time and money at the same time.
Posted by Greg at Woodhayes at 04:05 No comments:

A sea of bluebells in Crownall Wood 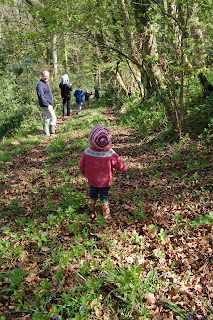 Taking our chances between showers, we went for a walk through the parkland to Crownall Wood perched below Dumpdon Hill. We have marked the trees ready for a path to be made into the wood to extract the timber and maintain the wood. The idea is to fell the dead trees to stop them from falling and taking out their healthy neighbours.

We found the bluebells under the dappled shade of the trees as we tramped through the heady whiff of wild garlic. We also spotted a pair of rare pink orchids hiding behind a tree stump. 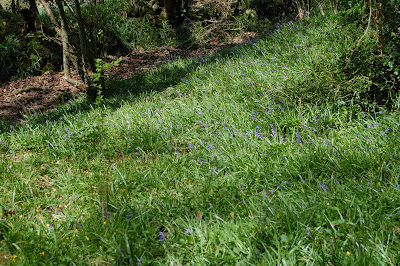 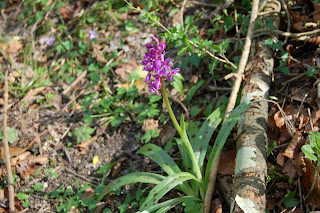 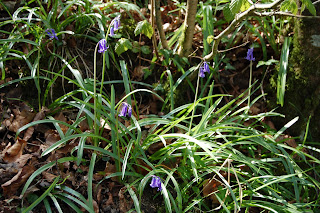 Posted by Greg at Woodhayes at 06:28 No comments: 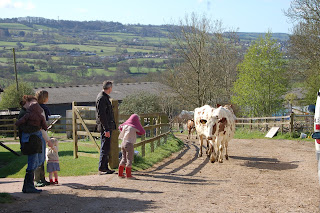 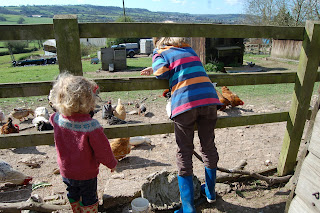 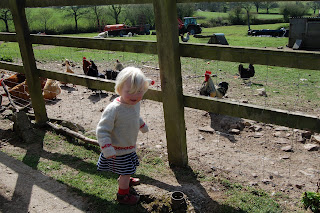 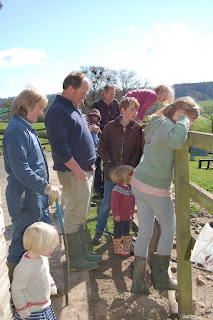 Blue skies on Sunday so a perfect day to take our friends and five children to next door Otterview Farm. Liz Tratt kindly showed everyone around. The children had a chance to feed the ducks, hens and guinea fowl, who braved the barrage of grain to come up to the fence to see us. The goose hatching her eggs in the barn was not so friendly and hissed at everyone. The star of the show was their latest Jersey calf - Gloria, who stole our hearts with her beautiful, brown eyes.

Posted by Greg at Woodhayes at 07:57 No comments:

Yesterday, after a tense few weeks, we finally received planning approval to convert our Dutch Barn into a space for offices, meeting room and art gallery. The application was initially refused and went to appeal with the final vote standing 10 for and 2 against. Nail-biting stuff !

Thank you so much to all those involved in helping our proposal through. I am sure that it will be a great asset to rural East Devon, The Blackdown Hills and especially to our parish of Luppitt.

This means we can embark on the final phase of our diversification of Woodhayes, perhaps our dreams of a Sculpture Trail look closer to realisation too.

Back to work after a few celebratory glasses of champagne last night, we are now on track and planning the conversion phase... 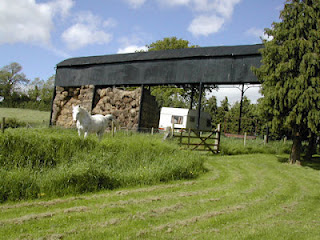 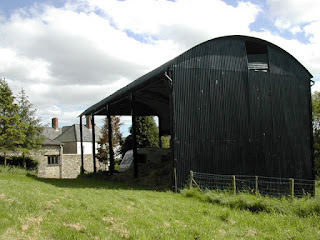 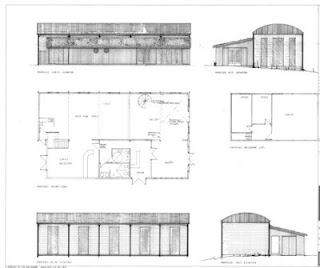 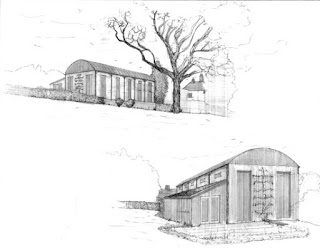 Posted by Greg at Woodhayes at 06:36 No comments: